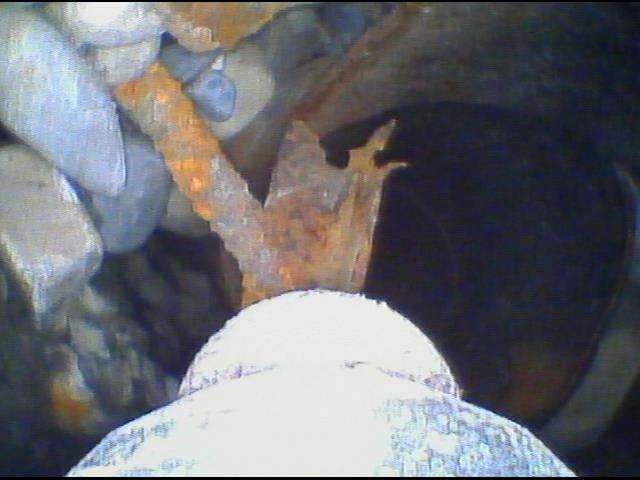 A high rise apartment building's maintenance team discovered holes in the buildings storm sewer.  The holes were allowing water to pour through the buildings foundation wall into underground parkade during rainfalls and snow melts.  The storm sewer was routed underneath the building, which would have made an excavation for repair very disruptive and costly.  Revive Pipes used existing access points in the storm water system to remove heavy debris and metal objects and install a Cured in Place Pipe (CIPP) liner in the pipe.

A Calgary, Alberta high rise apartment building was experiencing backups in their storm sewer system.  The storm sewer would back up and water would pour into the parkade under the building through cracks in the foundation wall.  A commercial drain cleaning company hydro flushed the eight (8) inch storm sewer and then performed a video inspection.  The video inspection revealed heavy debris remaining in the pipe and one hole in the bottom of the pipe.  The hole in the pipe was eight (8) feet deep, directly below the lobby in the building.

The traditional repair would have required:

The facility looked for alternative solutions for over six (6) months until a maintenance contractor requested an assessment from Revive Pipes.  We inspected the cast iron storm sewer and despite the heavy debris buildup blocking over half the eight (8) inch drain pipe in places, we were confident we could remedy the situation for the client.

The first thing we had to do was properly clean the debris out of the line.  Our highly skilled technicians removed heavy amounts of debris that was left in the sewer after the previous drain cleaning company had flushed the line.  Upon removing all of the debris, we were able to accurately assess the condition of the pipe.  What we found were 2 very large holes in the pipe.  Both holes were evidently caused by heavy metal support brackets for the pipe breaking through the bottom of the pipe as the building foundation and sewer pipe shifted.  The heavy metal brackets were both blocking half the pipe.  In addition, a large piece of the broken cast iron pipe was wedged vertically in the pipe, further obstructing flow.

Fortunately, Revive Pipe Restoration has the largest toolkit of specialized equipment in Western Canada for installing liners in complex configurations in small diameter sewer pipes.  We utilized on of our highly specialized robotic cutters to that is able to fit through a three (3) inch cleanout opening, yet was able to perform cutting operations in the eight (8) inch sewer pipe.  Our robotic cutter fully removed the two (2) heavy metal brackets and the vertically wedged piece of broken cast iron drain pipe.

Once we had used our specialized robotic cutter to remove the metal obstructions in the storm sewer, we installed a cured in place pipe (CIPP) inside of the existing cast iron storm sewer.  The entire process was completed without making a single excavation in the facility and was done using existing access points in the storm sewer plumbing.

We have a highly specialized suite of robotic cutters and specialty tools that is unique in Western Canada for rehabilitating small diameter sewers in complex configurations.

Can’t Shut Down Sewer for Repair